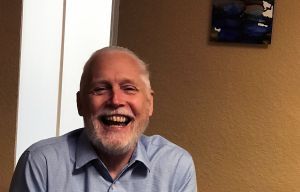 His primary focus has been art education, leaving little time for Lien to indulge his passion for sculpture, mainly wood sculpture. That changes in 2021. Lien is retiring and his last day at Pensacola State is Dec. 15.

“I haven’t been able to do as much as I would like to,” Lien said of his sculpturing. “This will give me time to definitely do more.”

“I think we have a great program and great facilities,” Lien said. “We have a foundry here. We have a wet-color dark room, state-of-the-art computers for Photo and Graphic Design majors. I taught at the University of Alabama and we have much better facilities than they do and twice as many art majors as they do.”

“If we can get the kids and their parents to come to campus and see this place, we got them,” Lien said.
“Especially if they’ve seen the facilities at other campuses.”

Besides leading the College’s Visual Arts Department, Lien also has been a major player in the Northwest Florida arts scene. He is past-president of the First City Art Center and remains a board member for the respected arts organization.

“He is so fluid in the art community and so respected,” said PSC Visual Arts instructor Jimmy Rhea, whose wife Caitlin Rhea is executive director of the First City Arts Center. “He’s just a cool guy to work with. He’s always easygoing and easy to get along with.”

Lien also has a wicked sense of humor.

When Rhea first arrived at Pensacola State in 2015 to teach, he told Lien he would have to return to his home in New England in two weeks to get married.

But while Rhea was in New England, Lien put up flyers all over the College campus showing Rhea’s pet possum with a beer and offering the animal to anyone for free.

“He (Lien) said my wife wouldn’t let me keep the possum so he put up all these flyers,” Rhea said. “I even started getting emails about the possum while we were working on the wedding.”

The thing is, Rhea never owned a possum, much less one with “a drinking problem.”

“That was my introduction to the Visual Arts Department,” Rhea said. “He always made sure the workplace functioned at a high level, but he also made sure it was an enjoyable workplace.”