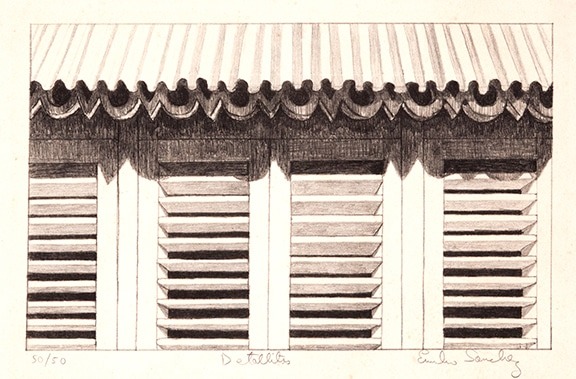 
Born in Camaguey, Cuba, Sanchez began his artistic career in 1944 at the Art Students League in New York City. His earlier works played on his fascination of light and shadow on colored forms. These features where very prominent in his early works of the 1950s which consisted of stylized and figurative themes, such as portraits, views of New York and tropical landscapes.

It was in the 1960s when his works became more abstract although retaining a strong essence of naturalism. Still focusing on light and shadow, it was during this decade that images like Detallitas were created. Architectural works simplified to the mere essence of their natural architectural structures acquiring a universal meaning dominated his works. Despite the fact many of his buildings were void of visible inhabitants, the structures hold a strong life-like presence all their own.

THE STAGES OF MAN

UNDERNEATH THE JUNIPER TREE
Go to Top