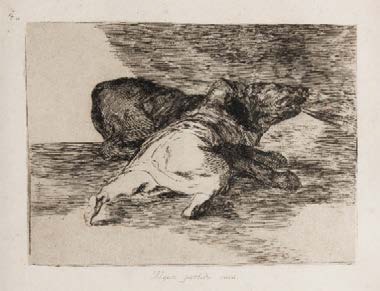 
Algun Partido Saca is listed as Plate No. 40 within Goya’s Disasters of War series. The estimated 80 plate series was created by Goya from 1810 – 1820 in order to visualize the horrors of the Peninsular War. The series also depicted the consequences the war had on the people of Spain and all persons involved, such as famine, broken homes and of course death.

The etchings are an illustration of the war and the reaction of the Spanish people after Napoleon Bonaparte invaded Spain in 1808 and tried to place his brother Joseph on the Spanish throne.

Goya’s ability to translate how war dehumanizes and creates misery for all parties involved is the pioneering beauty behind this series.