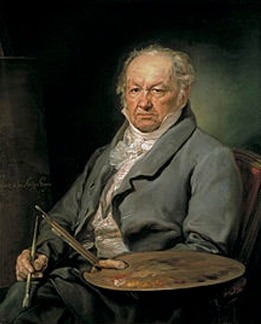 
From Wikipedia:
Francisco José de Goya y Lucientes; (30 March 1746 – 16 April 1828) was a Spanish romantic painter and printmaker. He is considered the most important Spanish artist of late 18th and early 19th centuries and throughout his long career was a commentator and chronicler of his era. Immensely successful in his lifetime, Goya is often referred to as both the last of the Old Masters and the first of the moderns. He was also one of the great portraitists of modern times.

Works in our Collection by Francisco Goya

Algun Partido Saca is listed as Plate No. 40 within Goya’s Disasters of War series. The estimated 80 plate series was created by Goya from 1810 – 1820 in order to visualize the horrors of the Peninsular War. The series also depicted the consequences the war had on the people of Spain and all persons involved, such as famine, broken homes and of course deat