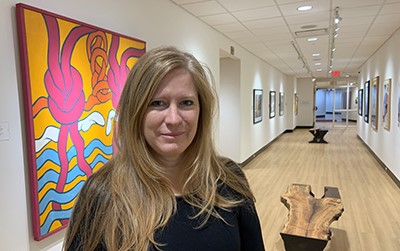 New gallery director hopes community will discover the wonders within

Michelle Schulte taps at the security keypad next to two large doors at the end of the corridor and swings one of the doors open, propping it with a door stop.

The room inside is dark ─ Schulte has some problems with the digital light switch ─ but no matter. It’s huge and very impressive, even in the dimness. The room is not quite a circle and not quite a square or rectangle. Like many of the rooms, corridors, nooks and crannies of the Anna Lamar Switzer Center for Visual Arts at Pensacola State College, this massive space is not a simple, unimpressive shape like so many other mundane buildings.

But as Schulte looks around the room, the excitement on her face has nothing to do with the shape or size or lightness or darkness of the room. It has everything to do with its potential.

A potential that is completely in her hands.

Schulte is the new gallery director and chief curator of the Switzer Center, which includes the Charles W. Lamar Studio, of which this 6,000-square-foot room is the focal point. All told, the Lamar Studio has added 10,000 square feet to the Switzer Center and a bevy of possibilities to the curator, who came to the College in October.

“I think one of our main goals is to bring the community in more,” Schulte says. “My goal is to figure out what we can show and who we can present and who we can bring in that will draw the community but still keep these other constituents happy, still be a benefit to the students and to the instructors and the administrators.”

Born and raised in Germany as a self-described “Army brat,” Schulte eventually landed with her family in Georgia, where she went to school and attended the Savannah College of Art and Design as a photography student. Upon graduation she taught art in the Savannah public school system.

“I decided that I really just preferred working with objects and writing about objects versus working directly with children, so I switched over to museum work, and started working with the Telfair Museum of Art in their education department,” Schulte says.

Her museum experience convinced Schulte that her future was more curatorial than strictly educational.

“In the museum field, how it works is generally the curators come up with all the content and then they pass it along to the educators, who then would teach it. I was feeling that I was missing out on a step, I was being handed content when I felt I should be crafting the content and making it all around inclusive.”

She continued in the museum field, working at a variety of locations, including 10 years as the curator of education at the Morris Museum of Art in Augusta, Georgia, and, most recently, as gallery director at Hood College in Frederick, Maryland.

Throughout, she says, she never ventured far from “that basic root of wanting to teach people.”

The teaching galleries of the Switzer Gallery and Lamar Studio were a perfect fit for her. In fact, she says, it was the beauty, size and potential of the facilities that brought her to Pensacola State.

“Every gallery is different,” she says. “When you come into someplace new, you get the feel for the community and you get the feel for your administration. You have a lot of different people to please. I need to make the people I work for happy, need to make the students happy, need to be able to make the instructors happy. This is a teaching gallery, so I need to be able to put artwork up and provide content that they can use and in which their students will be interested.”

But it’s not just the artwork that’s important, Schulte says. 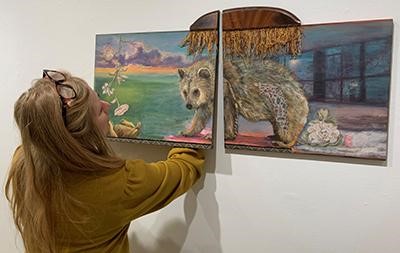 “I’m a big proponent of not just showing art work but bringing in artists and having them interact with people,” she says. “I really prefer artists who are open to that rather than artists who just want to ship you their artwork.”

Taking a visitor on a tour of one of the facility’s climate-controlled vaults, she browses through some of the items in the gallery’s permanent collection. The items, numbering in the hundreds, have come from a variety of sources. Many were donated, some by the artists themselves.

“Sometimes when an artist exhibits at the gallery, they’ll leave behind a piece as a donation,” Schulte says. She points to a work. “I believe that’s a Tracy Spikes piece there,” she says, referring to the artist whose exhibited this past summer.

Taking a piece of pottery from a shelf, she says, “We’ll probably start a teaching collection, perhaps a shelf in one of our common rooms. That way, if an instructor is covering a particular period or type of art, they can check out one of the pieces and you can have actual art work that students can handle. It expands that whole mission of being a teaching gallery.”

She comes across a student’s art work in the collection.

“It’s crazy to see the student pieces,” she says. “I’m always having to ask the professors, ‘Is this a student piece or not?’”

Schulte says the Switzer Gallery and Lamar Studio are in the middle of the accreditation process by the American Alliance of Museums.

“That’s the rubber stamp of approval,” Schulte says. “It shows that you are following best standards and best practices. It allows us to take in artwork that we wouldn’t otherwise have, and it shows artists that we’re serious about what we do. I think there’s only two or three college galleries in Florida that are accredited. The standards are really high. In fact, they crafted the new addition based on AAM standards.”

Schulte is preparing the gallery for two upcoming exhibits, Susan N. McCollough of Gulf Shores, Alabama (see below), and Linda Mitchell of Atlanta. In April there’s the Art Student Honors Exhibition (prompting her to repeat her earlier point, “the quality of the student art here is really quite amazing”).

But those are exhibits that already had been scheduled by the previous curator. Schulte is looking forward to putting her own mark on the gallery.

“Technically my goal right now is to figure out the next line of shows and how we can challenge the viewers and challenge the community a little bit more but at the same time draw them in and not push people away and still make everybody happy, so it’s a balancing act.”

She glances down a bright, polished corridor lined with pieces from the permanent collection.

“I don’t think the community understands what a nice facility this is.”
— Mike Suchcicki

Know of someone who would make a great Pirate Profile? Let us know at thepirate@pensacolastate.edu.