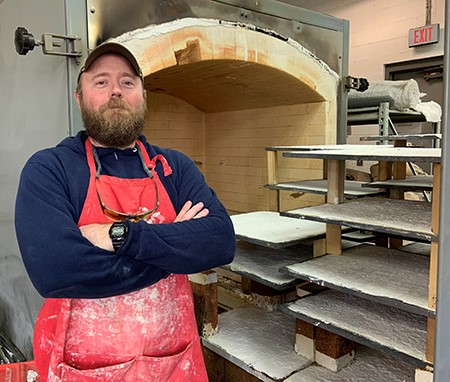 There’s probably a nice pottery-related analogy to be made about ceramics instructor Micah Cain, who recently begun only his second semester at Pensacola State College.

Something about being newly formed on the wheel, and then thrown into the fearsome heat of the kiln, otherwise known as the classroom.

Two things get in the way of that analogy, however: 1. We don’t know that much about pottery; and 2. Cain has enjoyed every minute of his time here at the College.

“From the moment I first stepped on campus, it’s just been awesome,” Cain says. “The administration has been helpful, department heads, fellow faculty, everyone has been helpful, and not only with classes. Everything.”

The Rome, Georgia, native comes to PSC after eight years teaching at Shorter College, where he received his bachelor’s degree in fine arts. (His MFA was from Georgia State.) At Shorter he was an assistant professor in the art department.

“Those eight years at Shorter really taught me, 1, how to teach, and 2, exactly what I wanted to do,” Cain says. “Shorter is a small liberal arts school and over those eight years I realized I wanted something larger.”

Cain has been devoted to ceramics since his first pottery class in high school. Soon after arriving in Pensacola in August, not long before his first semester as a PSC instructor began, he learned about the city’s large and active ceramics community.

“I’m slowly getting plugged into the local clay community, and it is pretty vast,” Cain says. “There are a lot of clay artists around. That was an exciting thing I didn’t know about Pensacola.”

He said he’s already hooked up with the folks at the Gulf Coast Kiln Walk Society, whose annual festival in Navarre has become renowned among potters nationwide.

Local enthusiasm for the pottery arts extends to the classroom.

“By the time I left Shorter, students were just taking ceramics just for fun, they really weren’t engaged,” Cain says. “The students here are engaged and dedicated. It was great to see that the Ceramics I students that I had came back for Ceramics II. That’s really exciting, to help build the clay community.”

Cain says he was aware, stepping into the PSC visual arts facilities, that he was following in the footsteps of a beloved ceramics professor, the late Bill Clover. Clover, who died in 2018, was PSC’s longest-serving faculty member, having spent more than 52 years at the College. He since has become the namesake of the Clover Pick a Bowl Fill a Bowl annual fundraiser for Manna Food Bank.

“Of course, when the person you’re following has been in the position for 50-plus years, there’s always going to be some intimidation, some hesitation, not knowing how you’re going to be received,” Cain says. “But the community here has been great. There hasn’t been one single person to make me feel out of place. I’m very happy to continue what he began and what he created.”

For example, Cain says, he’s looking forward to continuing with the Pick a Bowl Fill a Bowl campaign, which is similar to a project he worked on in Georgia.

“That is what’s so exciting about being in Pensacola,” Cain says. “There’s such an established culture. I’m looking to build upon that and continuing the reputation of the art department, and certainly ceramics. I go anywhere here and tell them where I am and it’s always talked about with respect within the community, so I certainly want to keep that up and keep that tradition of well-rounded students.”