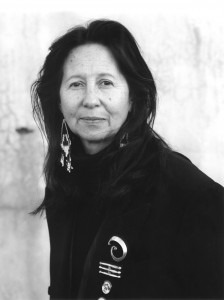 I am a cultural arts worker because I, not only, paint, do printmaking, some sculpture, draw, make collage, do public art, but I am also an independent teacher/professor and activist. I lecture, teach printmaking workshops, jury, curate, write and organize exhibitions for the Native community. In my work I use humor and satire to present narratives on ethical treatment of animals, humans and our planet. My work is philosophically centered by my strong traditional Salish beliefs.

Jaune Quick-to-See Smith was born at the St. Ignatius Indian Mission on her reservation. She is an enrolled Salish member of the Confederated Salish and Kootenai Nation, Montana.
She received an Associate of Arts Degree at Olympic College in Bremerton Washington. She attended the University of Washington in Seattle, received her BA in Art Education at Framingham State College, MA and a masters degree in art at the University of New Mexico.Jaune Quick-to-See Smith is one of the most acclaimed American Indian artists today. She has been reviewed in most art periodicals. Smith has had over 100 solo exhibits in the past 40 years and has done printmaking projects nationwide. Over that same time, she has organized and/or curated over 30 Native exhibitions, lectured at more than 200 universities, museums and conferences internationally, most recently at 5 universities in China. Smith has completed several collaborative public art works such as the floor design in the Great Hall of the new Denver Airport; an in-situ sculpture piece in Yerba Buena Park, San Francisco and a mile-long sidewalk history trail in West Seattle and recently, a new terrazzo floor design at the Denver Airport.

Smith has received awards such as the Academy of Arts and Letters Purchase Award, NY l987; the Joan Mitchell Foundation Painters Grant 1996; the Women’s Caucus for the Arts Lifetime Achievement 1997; the College Art Association Women’s Award 2002; Governor’s Outstanding New Mexico Woman’s Award 2005; New Mexico Governor’s Award for Excellence in the Arts 2005. Art Table Artist Honoree, NY 2011; Visionary Woman Award 2011, Moore College, Phila. PA; Elected to National Academy of Art, NY 2011; Living Artist of Distinction Award, Georgia O’Keeffe Museum, 2012; Switzer Distinguished Artist 2012; NAEA Ziegfeld Lecture Award 2014; The Woodson Foundation Lifetime Achievement Award 2015 and four honorary doctorates: Minneapolis College of Art and Design 1992; Pennsylvania Academy of Fine Arts 1998; Massachusetts College of Art 2003; University of New Mexico, Albuquerque 2009
She is in the collections of the Museum of Modern Art, Quito, Ecuador; the Museum of Mankind, Vienna, Austria; The Walker, Minneapolis, MN; Smithsonian American Art Museum, Washington DC; the Museum of Modern Art, the Brooklyn Museum, the Metropolitan, The Whitney Museum, NY and the Victoria and Albert Museum, London.
Smith calls herself a cultural arts worker which is also apparent in her work. Elaborating on her Native worldview, Smith’s work addresses today’s tribal politics, human rights and environmental issues with humor. Critic Gerrit Henry, (Art in America 2001) wrote: “For all the primal nature of her origins, Smith adeptly takes on contemporary American society in her paintings, drawings and prints, looking at things Native and national through bifocals of the old and the new, the sacred and the profane, the divine and the witty.”

Works in our Collection by Juane Quick to See Smith

Jaune Quick-to-See Smith states, “Theatres of War is a phrase used in WWI–I did this during Bush’s reign and Rumsfeld who made war sound like a video game. The bird sings like a machine gun and I used titles of Broadway plays in the ground.